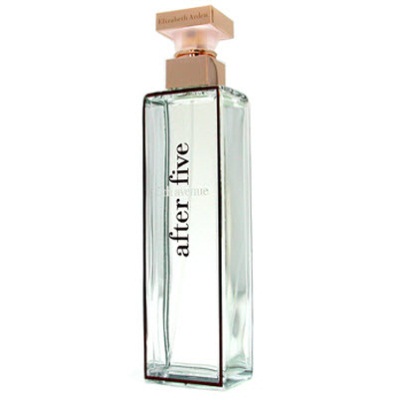 Created by Olivier Gillotin, 5th Avenue After Five is an accompanying fragrance to the original Elizabeth Arden scent named simply 5th Avenue. It is composed of the following notes: black plum, bergamot, coriander, muguet, jasmine, saffron, lotus blossom, sandalwood, white birch, Tonka and musk. This poised and exquisitely blended scent opens with sweet and spicy top notes of black plum, bergamot and corriander. Though initially rather sweet, it is a delicate teasing sort of sweetness that is immediately prevented from overwhelming the other notes by just the right amount of bergamot and corriander that add a much needed and complex edge to the simple plum opening. These initial top notes linger for a while, fusing with each other on the skin to create a wonderful synthesis of scents that begin to fade away almost as soon as they begin to dry and meld into one. At this point the delightful white floral heart begins to bloom whilst being seasoned with muguet, and saffron, making the middle notes of this perfume altogether more interesting and nuanced than other more simple white floral heart blends. The base notes have a similar synergy, a grounded woody musk entering in the final stages and carrying on well into the night, made edible and sensuous by just a hint of tonka bean right on the way out. The early evening version of 5th Avenue is a great success in my opinion and a scent sure to surprise long after you think you have grown accustomed to it.