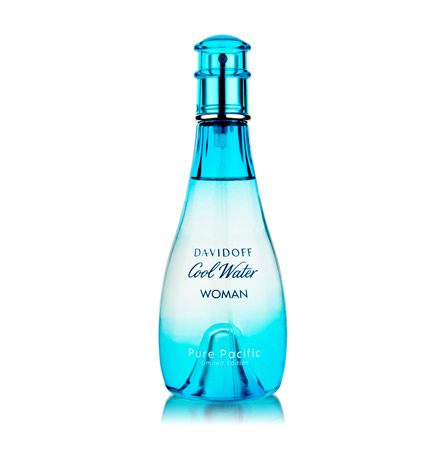 Created by Pierre Bourdon in 1996 Cool Water for women came off the back of the inordinately successful original Cool Water for men which catapulted the relatively new perfume arm of Davidoff to worldwide acclaim. Whatever you think of that original scent now, some say it smells dated, some think of it as rather cheap-smelling and far too obvious, nevertheless it did become one of the quintessential scents of the nineties and was an enormous financial success for the brand. A Cool ten years after the debut of Cool Water for men a version of the same scent was released for women. It ought to be noted that such was the popularity of the original cologne it became something of a fad for women to also purchase and wear it in the absence of a version for women. The women’s version is very calmer and more delicate than the original, less in your face, with  breezy and cool aquatic notes that are sweetened and lifted with hints of fruit and then brought back down to earth by a more woody middle and base. The top notes of fruit are comprised of Citrus, Melon, Quince, Pineapple, and melded with floral notes of Lotus and Lily. The middle notes continue primarily in a floral bouquet of Rose, Jasmine and Muguet which then ease off allowing base notes of Vanilla, Peach, Musk, Sandalwood, Orris and Vetiver that linger delightfully as the night wears on. In many ways a superior fragrance as compared to the original, Cool Water for Women is exactly what it says on the bottle.